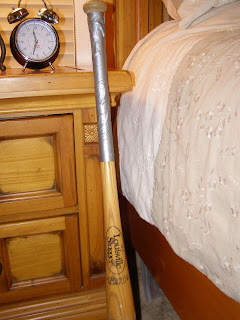 I have a baseball bat.  A high-quality, maple, close-grain timbered Grand Slam Louisville Slugger.  My bat rests against the headboard post of my king-sized Temperpedic bed within arm's reach because for the past 5 months I've slept alone and my bat's presence makes me feel a little bit safer.   This bat really belongs to my son, but I adopted it, gave it a name and it lives next to my bed.  I believe that if God named each and every star  then my bat deserves a name, so I call it  Babe.  Mostly in honor of Babe George Herman Ruth.  I don't know if Babe Ruth played with a Louisville Slugger.  I could have Wikipedia'd George and found out just to make it look like I knew and isn't that neat how she would know that, but I didn't because this isn't about Babe Ruth, and it isn't about my bat.  It also isn't about Babe the Blue Ox, even though my bat was also named after that illustrious character of American folklore.  Faithful companion, that Ox, just like my Babe, the duck-tape handled and slightly mangled Louisville Slugger.
This is about new beginnings and how I'm finding some aspects of my new beginnings easier to adopt and embrace than others.  One of these new beginnings is learning how to sleep alone in a king-sized bed when I'm only 5'7" and 118 pounds.  Do you know how much room such a tiny frame takes up in such a large space?  Well, not much.  I've kept to "my side" of the bed these past 5 months.  My side consisting of about 1/5th of the square footage of the acreage I nestle into at night with two cats,  my body pillow and not much else.  But I had an epiphany last night during another one of my many tossy-turny sleepless nights.  I could sleep anywhere on this giant bed!  Anywhere.  I could sleep on the other side.   I could sleep in the middle.  I could sleep sideways, or completely the other way around ala Pippi Longstocking.  I could sleep anywhere in anyway I wanted.  "Dang!"  I thought.  "This is gonna be sweeeeet!"
So Babe, with the grey duck-taped handle, for a better grip when I have to kick some bad guy's ass and the chip out of the bottom where I think my son may have bashed something other than a ball, rests against the head of my bed.  And I get to rest anywhere I want.
Posted by The Black Swan at 5:39 AM

And because it's a king-sized bed, you can even sleep sideways if you want! Go for it! That's even better than singing in line at the post office.

When I finally do sing out loud, spreading Christmas cheer for all to hear in the Post Office, I'll let you know which I prefer.